A lot of people live in Paris, and have been living here for a long time (since 9800 B.C. to be precise).  A practical question arises with this: what happens to all the the dead people?  The Catacombes de Paris is a sprawling underground network of tunnels which stores the remains of over six million corpses.  It’s hard to belive that the beautiful and vibrant city of Paris lies on top of a massive underground grave which contains centuries of  deceased Parisians. 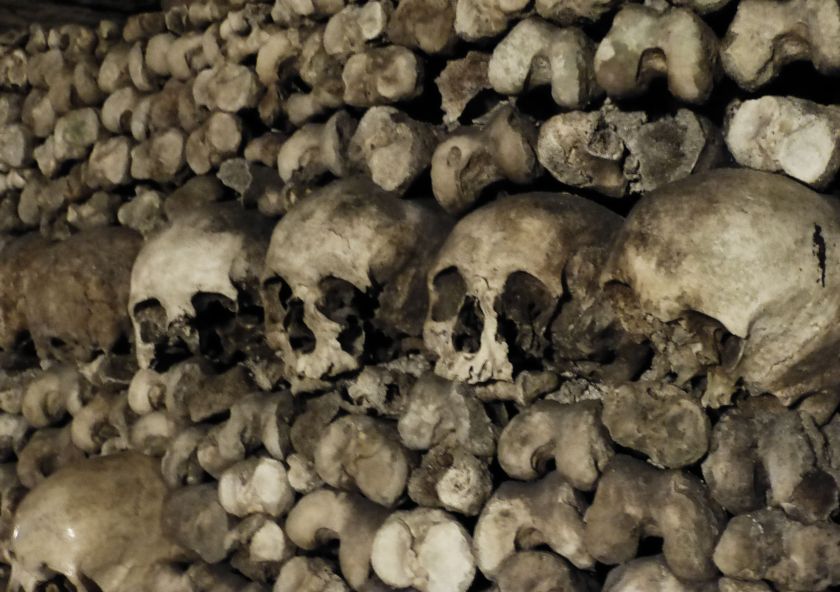 Wow this is sounding pretty creepy… can’t the bones just be buried under the ground and then we can leave it at that?  Nope, this is Paris and everything is beautiful, so the bones are displayed in an overtly ornamental manner and tickets are sold to visitors wanting to explore this “curiosity” of Parisian culture, and this is one of the most-visited tourist attractions in the city.

Woah hold on a second, isn’t  based on avoiding tourist traps?  What about this is cool and alternative?  While waiting for entry to the catacombs we got to say hello to the guitarist of Deafheaven (who was also standing in line) so I guess that’s kinda alternative… 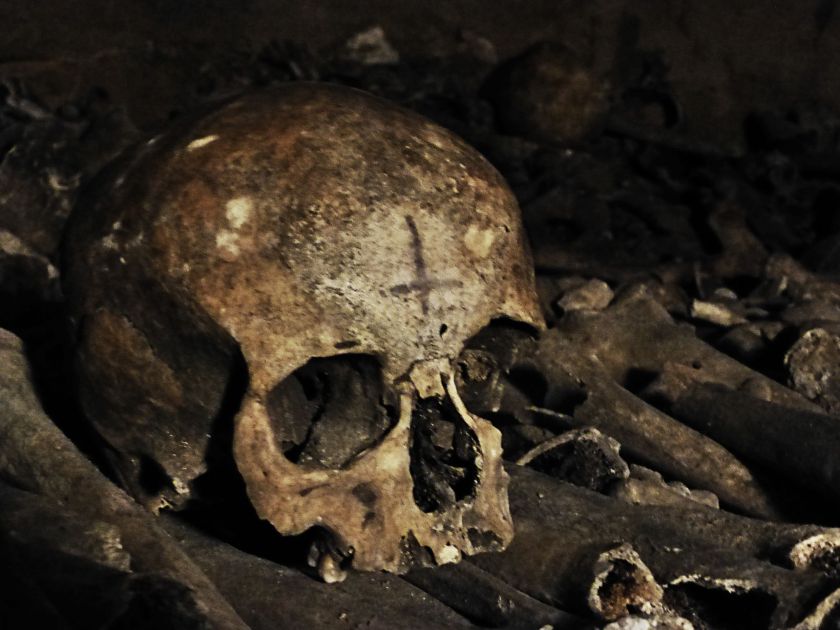 ^^^The bones are carefully arranged and form different designs, like this love heart of human skulls… I haven’t used the word morbid yet, have I? 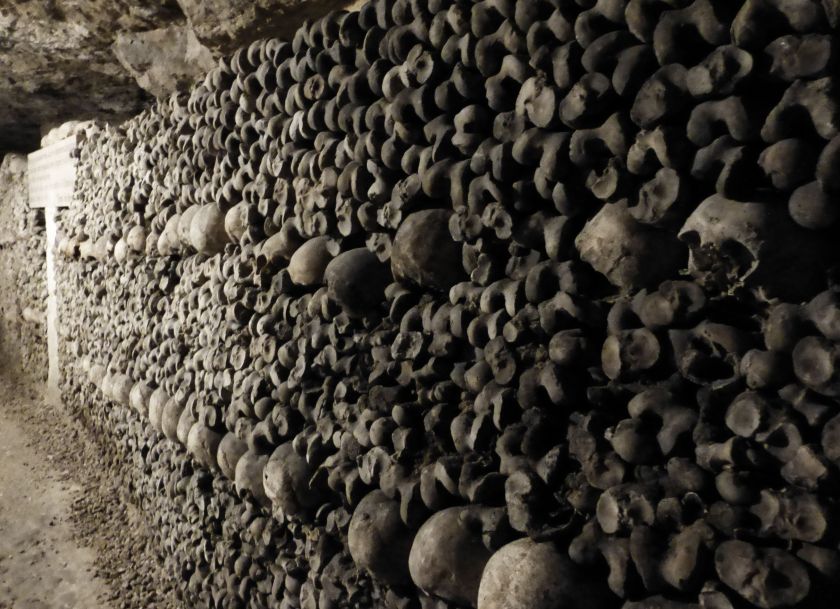 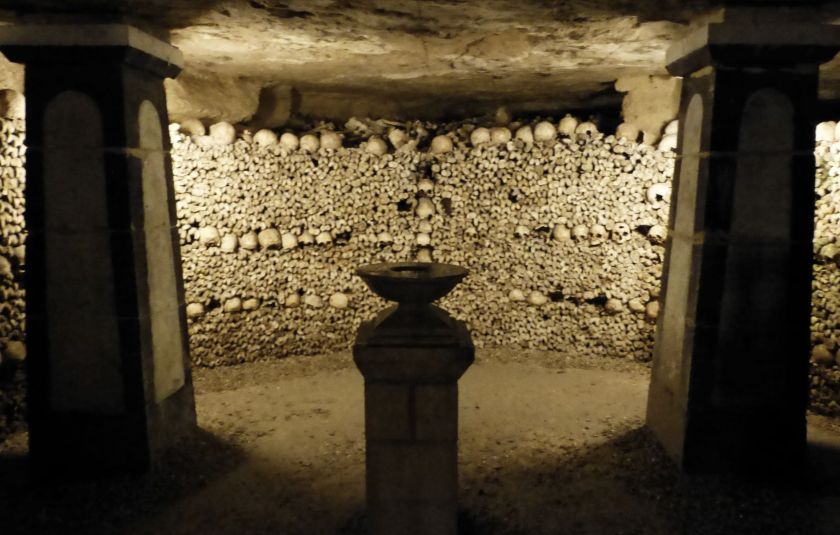 ^^^The Crypt of the Sepulchral Lamp… suddenly it is 1995 again and I am seeing a Goosebumps book written about this room at the Scholastic book fair!

Something important needs to be said about this cavern: it is cold.  And wet.  It poured rain the previous day, and water slowly dripped through the ceiling of Lucian limestone onto the heads of both the living and the dead in this otherworldly cave.  The surrounding walls and floor were wet to the touch… very surreal. 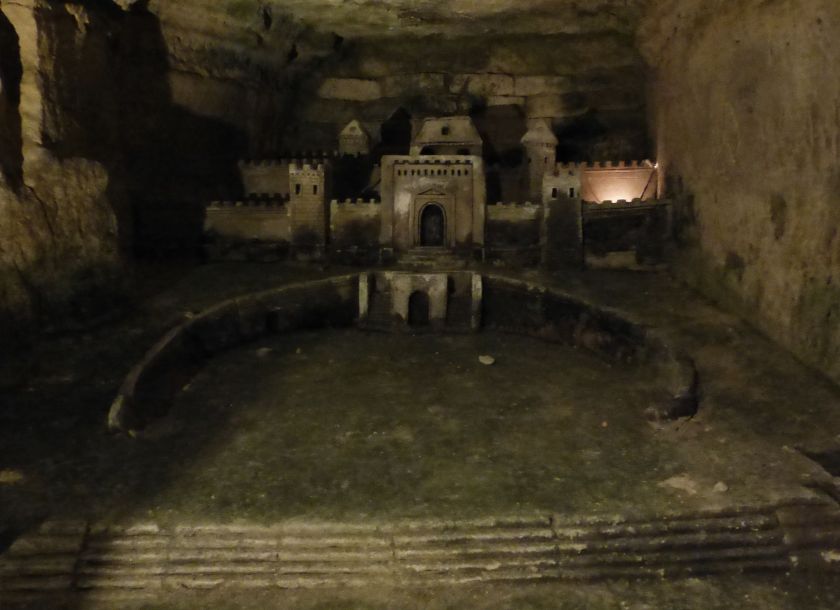 ^^^A scale replica castle was carved into the limestone by a short-lived prisoner/excavation artist who worked in the caves… the dates of his life and death are etched into the adjoining walls.

^^^We found moss growing amongst the bones; this could be considered a prominent metaphor in a very serious dutch still-life painting.

A trip to the catacombs gives visitors a poignant reminder of the fragility and brevity of human existence, but in a bizarre context that borders on science fiction.  Once we emerged from the cavernous depths we simply walked through the surrounding sunlight-filled streets in a daze.  It’s difficult to process your surroundings after seeing so many bodies taken apart and reassembled into such an anonymous and otherworldly momument to death.  Each of these skulls was once a living, breathing person who had hopes and dreams, and this is a great reminder that our every-day worries and struggles really don’t deserve as much power as we give them.  In the end, we too will look like this.  We went into the catacombs expecting a tourist attraction, and we left somberly questoning the philosophy of life.  The words “what did we just see?” were spoken several times…

^^^…at which point we entered another graveyard, this time with a little more light and a lot more space.